Pendants and charms come in all sizes, designs and materials. Sometimes, there is a bit of confusion about what makes a piece of jewelry a charm vs. a pendant, and to add to the befuddlement, some people use both terms interchangeably.

The Oxford English Dictionary defines a pendant as “A jewel, bead, tassel, or the like, attached loosely to clothing, etc., so as to hang down as an ornament; an ornamental fringe (obs.); (now) esp. a loosely hanging piece of jewellery worn on a chain around the neck; a necklace with such a piece of jewellery attached” or ” The hanging part of an earring; an earring with a substantial hanging part, an ear-drop.”

and a charm “Anything worn about the person to avert evil or ensure prosperity; an amulet” or “A small ornament or trinket worn fastened to a watch-chain or girdle.”

There are no set standards, but generally speaking:

Pendants are larger than charms

Pendants often have bails. A bail is the “loop” on the pendant that you use to hang it on the necklace. Bails can be “built-in” parts of the pendant, soldered on, or separate findings that you attach to the pendant in a variety of ways (depending on the design of the bail).

Bails are normally not used for charms. It is possible to attach a charm to a bracelet with the help of a bail and a jump ring, but it gets bulky and can look a little bit clumsy. It can be done though – I put a bail and

a jump ring on a tiny briolette (photo on right), and it is small enough that it could comfortably fit on a charm bracelet.

Pendants are usually too large to comfortably wear on a bracelet, however, if we look at vintage jewelry, there were medallion charm bracelets (especially popular during the 40s), which had one huge (by bracelet standards) medallion, large enough that I would label them pendants, so it is essentially up to the wearer where to draw the line.

Charms are smaller than pendants, often designed especially for use on bracelets and come with jump rings, split rings, link locks or lobster claw attachments, or if you buy a finished bracelet, they may be soldered on. 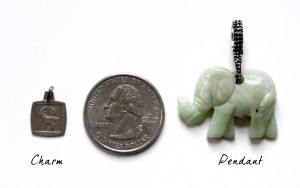 Charms can easily be put on necklaces (as well as rings and earrings). You can attach your charm just as it is, or use a charm holder – a ring with an opening where you can slide your charms on and a bail up top – specifically designed so that you can put one or several of your charms on a necklace.

The word charm can also describe European-style beads, like Troll beads, Chamilia beads, Pandora charms, etc. They are often round beads (but come in other shapes as well) with a hole through the middle (some with dangles), and can be put on both snake chain bracelets and necklaces.

Then there are Italian charm bracelets, which with their interlocked link system do not look like what you normally think of as charms at all (although some of them have dangles as well).

Pendant charms are usually pendants, i.e. too large to use on bracelets.

A mini charm pendant is also usually a pendant with a bail (or sometimes just a hole), just a bit smaller.

Mini-pendants can be anywhere from ¼” to over 1”, and come with the usual variety of attachments, so all can be used on necklaces and the smaller ones can be used as charms on bracelets.

Mini charms are even tinier charms, mostly intended for use in crafts (scrapbooking, card making, for wine glass charms, etc.), but I like them for children’s bracelets, or as part of a “regular sized” one too.

Cake charms are smallish, often good luck charms intended for use in wedding cakes. The tradition goes back to Victorian times, and what you do is tie a ribbon to each charm, put the charms underneath (or inside) the cake, and let each member of the wedding party pull out their own charm (sometimes this is done at the shower instead of at the wedding itself). And you can of course use them on bracelets and necklaces as well.

Fobs were popular in the late 1800s and are essentially charms that were intended to be put on a watch chain or chatelaine (but work equally well on a bracelet). They were sometimes just decorative, sometimes utilitarian (like a key for example). Today, they are popular collectors’ items, and often used on charm bracelets.

For more terminology, also see the “Charm Beads and Beads With Charms” post