Wallis Simpson used to say “I’m not a beautiful woman. I’m nothing to look at, so the only thing I can do is dress better than anyone else.” And she did – she was a style icon of her time, and it was not just her clothes; she also had some fantastic jewelry. 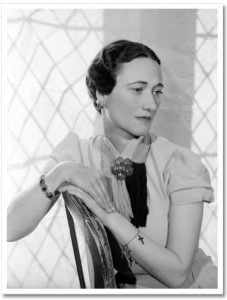 She is in the spotlight again thanks to Madonna’s new movie, W.E., which tells the story of Wallis Simpson and Edward Windsor (King Edward VIII before he abdicated in 1936 in order to be able to marry her), a story that alternates between the past and the present. There has been tons written already about the costume design – Madonna was adamant that everything be true to the original, and when she wasn’t able to get her hands on the original designs, had exact replicas created (several of the large fashion houses offered to make them for her).

And the same goes for the jewelry – what you see in the movie is a mix of antique pieces and reproductions. There is the famous panther bracelet, the zip necklace from Van Cleef & Arpels, and my 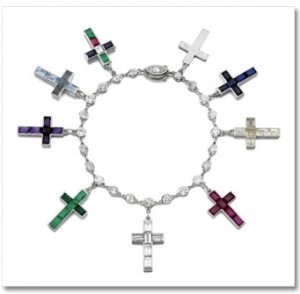 favorite: the Cartier cross charm bracelet, which was a gift from Edward to Wallis while their relationship was still a secret (set costume designer for W.E., Arianne Phillip,s has described it as being at the center point of their relationship). It consists of a chain of diamonds with nine gemstone-encrusted platinum crosses which she received as gifts from Edward over the course of 10 years to mark certain milestones in their relationship. Each cross has a date and a personal message inscribed on the back, and the fronts are set with sapphires, rubies, emeralds, aquamarines, diamonds and amethysts.

Wallis (who became the Duchess of Windsor after she married Edward) loved the bracelet and wore it almost every day, including at her wedding. The original was sold at Sotheby’s, first in 1987 (the profits from that auction were donated to the research hospital Institut Pasteur in Paris) and then again in 2010 for just over £600,000 (equivalent to around $940,000 today). The one we see in the movie was recreated by Cartier based on drawings they had in their archives.

Cartier recreated 10 pieces of jewelry all in all for the movie, but once the promotional phase is over, they will be destroyed. Seems crazy, but Cartier says they’re doing it in order not to 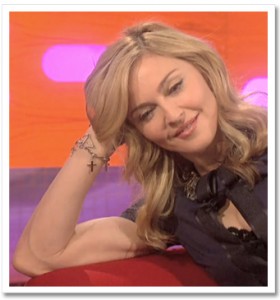 devaluate the originals. One piece they don’t have to worry about though is that cross bracelet – it was lost in the Mediterranean while filming a beach scene in Nice (makes you wonder if someone has found it by now and is hiding it at home, doesn’t it?).

Madonna loved that cross bracelet and wanted to keep it for herself, but Cartier had already said no even before it was lost. BUT, they did make her a similar version which she has been seen wearing quite a bit (I noticed she was wearing it on the Graham Norton show earlier this month).

The movie opens on February 3 here in the US, and I can’t wait to see it. From the previews, it looks gorgeous – the scenery, costumes, the jewelry, everything.