I don’t know if it’s just the part of the US where I live, but it always seems to me that Trollbeads keep a much lower profile than the other European-style bracelet brands – no flashy billboards or prime time commercials, and way fewer glossy magazine ads. That might change soon though with the recent appointment of Michael Belleveau as the new CEO of Trollbeads USA. He recently said in an interview that he plans to step up the marketing efforts, perhaps introduce Trollbeads to some of the higher-end department stores, and do co-branding with certain fashion labels.

It will be exciting to see where this goes, but in the meantime, there are several new additions to talk about:

Trollbeads recently announced their new fall collection of charms, all in appropriately somber

autumn colors. There are 14 new glass beads, 7 silver, 1 gold, 1 tiger eye, and two mixed metal (and one new mixed metal clasp). One of the new silver additions is the “People’s Bead” winner this year, the “Rolling Waves”. It was designed by Denise Tong,

inspired by the tsunami that hit Japan this past spring. But rather than a reminder of a disaster, it is intended to remind us to respect nature. And there also is a new upcoming release: a coin bead with the Troll beads logo on one side and an earth and heart design on the other.

Earlier this summer, a brand new line of charms were introduced: the Universal Uniques – a collection of over 100 glass beads. The new beads have a larger core, allowing them to fit not only on Trollbeads bracelets (as is the case with most of the other beads), but other brand’s snake chains as well, like Chamilia, Lovelinks, and Pandora bracelets. Devoted Trollbeads fans have had mixed reactions to this, some saying that the Trollbeads bracelet was the original and they should not modify their products to fit others; others think it’s a smart move and one that will allow for greater variety to the end user. I think both sides have good points, but ultimately, I have to agree with the pro-side. I think it’s great that those who want to stick with their “other brand” bracelet now have even more choices. 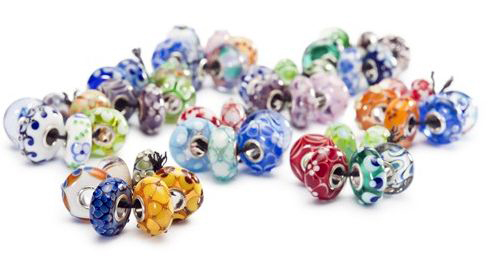 Come October, there will be two new ring sets with beads available. The “Strength, Courage

and Wisdom ” sets come with either a rose ribbon or pink prism bead, and a portion of the proceeds go to the Breast Cancer Research Foundation. The pink prism bead is an original design by Lise Aagaard, retired in 2007, but back now for a short time.

And, coming up later this month (September 23-24), the second annual TrollbeadsFest is being held in New Bedford, MA. Highlights include an entire table of retired Trollbeads, the opportunity to see a glass bead being made, and visits from Danish jewelry designers Kim Buck and Eske Storm as well as last year’s People’s Bead winner Kristi Denning.

For more and the company history, check out my earlier Troll beads post. Also see the Even More Trollbeads…. News and The New Trollbeads Winter Collection posts.